adventure2016 / Spring Training
In March 2016 I headed to the Phoenix, AZ metro area to partake in a little springtime baseball. It was an annual tradition to go to a Dodgers/Mariners game at least once each spring. Due to various small life events, like getting married and such, for the past two years we were unable to attend. Alex and I (Dodgers fans) went with our good friend Ryan (Mariners) to see them play at Peoria Sports Complex, which is the "home" field for the Seattle Mariners and San Diego Padres. 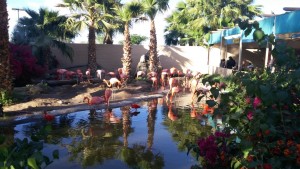 To be different, we drove out early Friday morning, a day before the game. Usually, we headed out after work, ending up in Phoenix after midnight. After getting to the Phoenix area with enough time to kill to do something but not enough to visit the Musical Instrument Museum, we settled on visiting the Wildlife World Zoo & Aquarium. Since we got there after 5pm, only the Aquarium was open, but that was what we wanted to visit anyway. It was a pretty standard aquarium, but there were some fish that we had never seen in person before, like the Arapaima. I had seen it before on River Monsters, but it was amazing to see them in person, behind glass. They were huge, and looked like eels. Sadly, I forgot to take pictures while were at the aquarium, other than one of the flamingos when we first arrived. We also saw some Asian small-clawed otters, and they were active and running all over their cage. One of them seemed to be "it" and all the others were chasing him around. It was funny, but also kind of sad. It made me feel like the otter being chased was being bullied. After the aquarium, we headed back to our hotel in North Phoenix for the night, with a short stop at a store to pick up some bottled water for the game the next day.

Saturday morning rolled around, and after breakfast at Starbucks, we headed to the stadium. I have been a baseball fan for most of my life, and I still get excited every time we are entering a baseball stadium. After finding our seats, grabbing some hot dogs for lunch and hanging out for a while, the players started making their way out onto the field. The game was what is called a "split-squad" game, where only half of the team plays. The other half saves their energy for a second game, either later in the day, or sometimes simultaneously in a different park. One of the great things about Spring Training in Phoenix is that half of the MLB has a stadium within close proximity, so it's easy to hop from one game to another, if that's what you want to do (and can afford). Ryan did a great job finding our tickets this year. We were in the first row, right behind the net on the away side of home plate. It was amazing how close we were to these players that normally we only ever see on TV. They're real people, not just little creatures in a box on the wall. After snapping a few pictures with the net in the way, I realized that I could just lean forward and put the phone against the net and get much clearer pics. After the first inning, I focused on the baseball and forgot to take more pictures.

One cool thing that happened during the game was Tommy Lasorda showed up to watch. We were pretty excited, as we actually had better seats than him. I was able to get a selfie with myself and him in the background. We watched a steady stream of fans come up and request his autograph all throughout the game. Because it looked like he was slightly annoyed at all the commotion, we opted to not bother him further. After the game was over, for dinner we had terribly bland "Mexican" food at a restaurant in Peoria. It seems we still can't find good Mexican food outside of Southern California. I had such high hopes, and was greatly disappointed. Thanks for nothing all you people rating places on Google.

Sunday was going-home day, but we always like to visit the Musical Instrument Museum when we are in Phoenix. It's a pretty amazing museum where you can learn about all sorts of musical instruments from cultures all around the world. It's a great place to just wander and learn. After spending way more time than planned at the museum, we headed home about 4pm. It was a pretty uneventful drive home, but we had an awesome sunset to watch as we drove down the road. 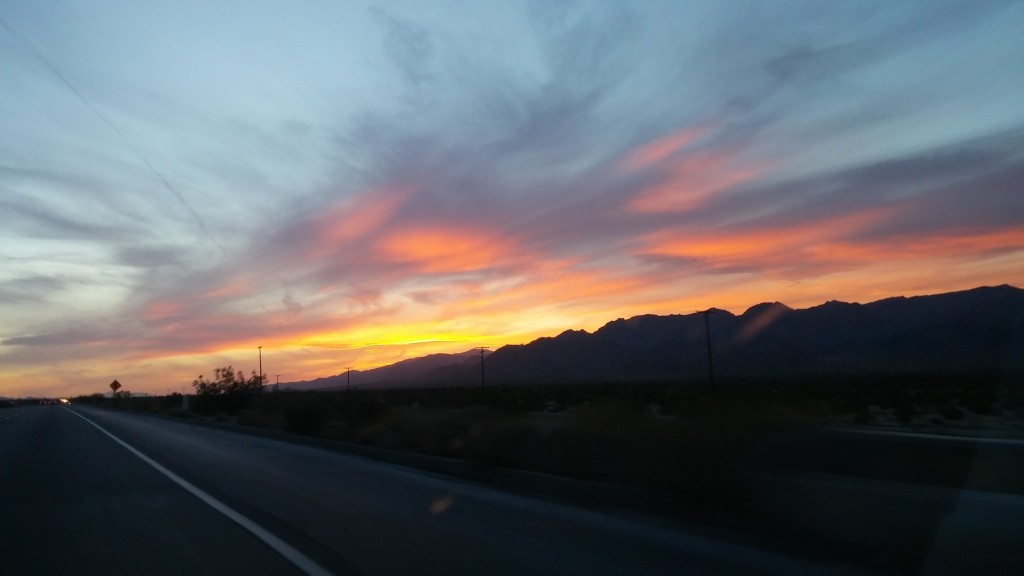