adventure2021 / Alaska Cruise
In August 2021 we finally went on our long awaited Alaska cruise. While in Alaska, we visited Juneau, Skagway, Glacier Bay National Park, and Ketchikan. Alex and I have been wanting to go to Alaska for quite a few years. We originally had booked and paid for a southbound cruise from Anchorage to Vancouver in May of 2020, but then COVID happened. Not knowing what was in store for us for the next two years, we used the goodwill credit from Princess to re-book for later in 2020. Well, as we all know, that wasn't meant to be. After a few more cancellations and re-bookings, along with an act of Congress to change some shipping laws, we finally got booked for an August 2021 departure. By this time, sailing into or out of Vancouver was not a possibility, due to border restrictions, so our cruise became a round trip from Seattle. 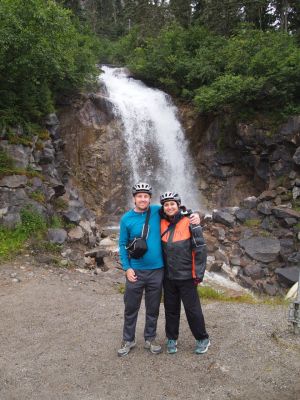 Our trip began at our new home airport of Ontario, California, where we caught a flight up to Seattle. It was a late afternoon flight, so when we left Ontario, none of the restaurants were open. We didn't get a chance to eat before heading to the airport, so we boarded the plane hungry. Once we landed in Seattle, the airport restaurants were once again closed. After spending quite a while trying to figure out where our luggage was going to come out on the carousel, we finally caught a shuttle to our airport hotel where we were going to stay for the night. There were no restaurants within close proximity that were open, so we ended up eating premade sandwiches from the fridge in the hotel lobby. It wasn't great, but it was good enough to quiet our stomachs so we could go to sleep.

The next morning, we awoke to find out that the hotel's breakfast chef decided to not come in. They apologized and provided a shuttle to the Denny's down the street, so we went there for breakfast. After a decent meal, we headed back to the hotel, checked out and made our way back to airport, where we were supposed to catch our transfer to the cruise port. Although we thought we were there early enough, there was a huge crowd, and it took quite a while to get on a bus to the port. The driver tried to make the best of the long, boring ride from the airport, and we saw a lot of Seattle on the way, but it's definitely something that could be improved upon. Maybe some kind of light rail that goes directly between the air and cruise ports would be nice.

Once we got to the port, even though we went through all the pre-screening process in the Princess app, we still got stuck in the giant line to get into the building. After we finally got through the line, the rest of check-in was a breeze. We already had our medallions and were able to bypass a lot of extra lines, heading straight to the boarding area. We climbed up the gangway, and upon entering the ship, were greeted by tons of the ship's crew. It was so nice to finally be back on a cruise ship, and you could tell that the folks that work these ships for their livelihood were genuinely as excited for us to be back as we were to be there. This cruise was only the second one in Princess' return to cruising. We got lucky, as at this point there were very few mask rules, and they mostly pertained to embarkation and disembarkation in the various ports. Aboard the ship, we were free to not wear our masks the entire time, although, sensibly, the crew still did. After our cruise, the rules changed to require masks in all indoor public venues on the ship, which is basically the whole ship. As I said, we got lucky. 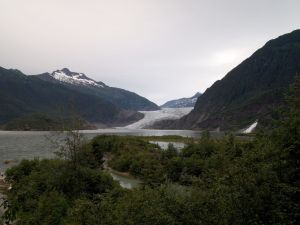 Our first two days on the ship were At Sea days, as we headed up towards Juneau. It was just so relaxing to finally be back on a cruise ship, the time really flew by. Surprisngly, the route from Seattle to our first stop, Juneau, was not actually in the inside passage, even though that is the name of this particular cruise. Instead, we traversed around the outside of Vancouver and Graham islands. I imagine this had something to do with Canada's border restrictions at the time, or possibly to make sure we could complete the cruise in the allotted time due to speed restrictions in the narrow fjords? It didn't really make much of a difference though, and we eventually made it to Juneau. Interestingly, Juneau is the only state capital that cannot be accessed by car, without taking a ferry. I guess you could theoretically put your car on a ferry to Honolulu, but I don't think such a service exists. To get to Juneau, you need to drive to Skagway and catch a southbound ferry, or ferry directly from Seattle at a significant cost.

Upon arrival, we disembarked the ship and boarded a shuttle to our first excursion, which was a combination of a whale/nature watching cruise and then a visit to Mendenhall Glacier. Although we did see some whales and a few eagles on our trip, neither Alex or I were terribly impressed with the results. I think a smaller boat experience might be more fun, but our excursion options were limited due to many companies going under during the 18 months without any tourism in the state. I bought some binoculars for this trip, and there were definitely worth the money I spent on them. The one drawback was that because I was using the binoculars to look out for whales, I forgot to take any pictures! After the two-hour tour, we were taken by bus up to Mendenhall Glacier, where we did some hiking around the glacial lake at the foot of the glacier. We weren't able to get too close to the actual ice due to the limited time we had allocated for this part of the excursion, but it was still a nice hike through Tongass National Forest to the water's edge. Eventually we had to catch our bus back down to the docks, and re-boarded the ship. 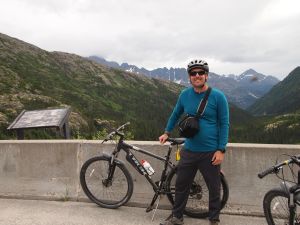 The next day we arrived in Skagway, which was my personal favorite stop on this cruise. I am slightly biased in that opinion though, since we got to ride bikes down a mountain pass for our excursion. The weather in Skagway was quite warm and comfortable, with only a couple of fat drops of rain as we wandered around town, visiting the various museums and small shops. It eventually got sunny, and we were taken to the top of the White Pass, almost to the Canadian border. With restrictions still in place, we were unable to actually cross the border, but we still did have to go through US Customs on the way back down the mountain. It was kind of fun being a group of 20ish people all riding our bikes through customs, as they checked us each off going through. It was a really fun ride down the mountain, and I only wish I was able to go faster. Because of the varying skill levels, we were basically riding the brakes all the way down the mountain to avoid passing each other. Rules... ugh.

Our next port of call wasn't for two more days in Ketchikan, but in between was a day of "scenic cruising" where we visited Glacier Bay National Park. Unfortunately, it was extremely cold and cloudy the day we visited, so my pictures did not come out well, even with Alex's fancy camera. We saw tons of sea otters swimming around and some seals hanging out on some icebergs. We also got to see some glaciers, surprise surprise! They are receding at a record pace though, so who knows if they'll even be there if we ever go back in the future.

The final stop before heading back to Seattle was Ketchikan. This was my second favorite stop. The town was really cool to just wander around in. When we boarded the ship on the first day, we found a note in our cabin explaining that our excursion here in Ketchikan was cancelled. Not knowing what to do, we browsed through the available excursions in the app, and went through four other choices before finding one with two seats available. We ended up doing a canoe trip and nature hike on and around Harriet Hunt Lake. While it was our 5th choice, it was still fun and worth doing. Before the canoe though, we had to take a bus up to the lake. Because tourism was shut down for so long, most of the operators had to improvise for things like bus drivers. Ours was normally based out of Juneau, and so had very little knowledge of the surrounding roads. She ended up taking us on a 45 minute detour and got us to our final destination very late. One passenger quipped that it was part of the Alaska Bus Adventures tour. Eventually, we made it and it was raining and cool at the start of adventure. Rain jackets and pants were provided to those who wanted to wear them, along with our life jackets. I had brought my own rain jacket and water-resistant pants, so didn't actually use the provided gear like Alex did. She did stay a bit drier than me though. The excursion had all participants paddle a giant, twenty-person canoe across the lake while our guide explained the nature around us. I was quite surprised to find the lake water was significantly warmer than the outside air. Our guide said she swam in the lake daily, after her tours were over for the day. I was tempted to take a quick dip as well, but didn't come prepared for that so chickened out.

When we were eventually returned to the docks, we still had a lot of daylight and in-port time remaining. Alex and I walked along Ketchikan Creek, checking out the cool salmon ladders and the old houses. At the top of the hill, we stumbled upon the Totem Heritage Center and so we paid to go in and see all of the cool totem poles. It was a pretty nice museum and explained a lot of the history of the surrounding native tribes that created the totem poles spread throughout the Pacific northwest. Eventually we had to return to the ship though, and so we did, to begin our trek back to Seattle and then home.

Our final day on the ship was another at sea day, so we spent it relaxing in the indoor swimming pool and packing our stuff up for disembarkation. Upon arrival, after a huge mess trying to get on our shuttle to the airport, we finally made it there. We nearly missed our flight because of the clusterfuck that is Seattle's ports (both sea and air), but eventually we returned to Ontario and drove ourselves back home. One thing I always enjoy after a trip like this is being in total control, in this case, driving Alex's car back home after a quick stop at Cafe Rio for some lunch.

Overall, a very fun and informative trip, and just an introduction to hopefully many, many more visits to Alaska. Just next time without having to go through Seattle. Those ports suck.